It’s been a while since blogging, as I have been learning and playing with all the new features that are about to hit with Microsoft’s October Release Wave 2. Read more about the Dynamics 365 enhancements here: https://docs.microsoft.com/en-us/dynamics365-release-plan/2019wave2/ or for the Powerapps enhancements: https://docs.microsoft.com/en-us/power-platform-release-plan/2019wave2/.

So there’s been a lot of conversation in both the FLOW and Powerapps forums about the deprecation of the Dynamics 365 connector.

WRONG. So there’s been a lot of new features added to the Common App connectors that are not apart of the Dynamics 365 Connector. This is likely in part to the large following of SharePoint and other users interacting and requesting features for the Common App platform. Remember, these guys know very little about what the Dynamics 365 platform and where it started from. So Microsoft has decided to only make updates to the Common App connector moving forward, and soon we will here the Dynamics 365 connector will be gone. This is coming from all the support forums and answers posted in the public – so NOT NDA content here, just insights into what everyone is hearing. 🙂

So, I decided to take my existing apps and change the connectors to Common App connector and I immediately was presented with a bunch of errors and code that was tested didn’t work, or in this case, not even return data rows from Dynamics? What happened? I thought it was supposed to have everything plus what the Dynamics connector provided?

So, sharing this with you, so you don’t have to go thru the pain of thinking your app is no longer working: 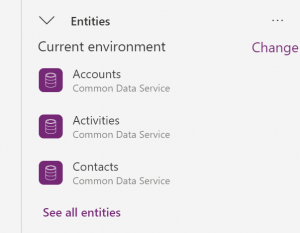 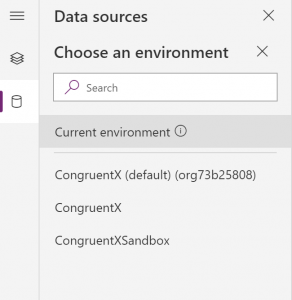 Step 1.  Is the crazy part. When selecting your entities choose the common data service connectors.

Notice on my screen shot above the work CHANGE? We’ll you won’t see that unless your mouse is in the exact spot! You will need to hover over the current environment text and then you will see the option to change.

Step 2. Once you press the change, you can now selected your instance of Dynamics. Note the default org is your CDS instance, the others are Dynamics instances.

We’ll I hope this little tip saves you the hours I lost trying to find it! Now on to some new posts using the CDS Connector! Enjoy